With women just as likely as men to use a credit card to make a purchase, and apply for a loan or mortgage, it’s easy to forget that it hasn’t always been that way. In fact, it’s only been a few decades that women in the United States have universally enjoyed the privileges and rights that they have today in the realm of credit and finance, guaranteed and protected by law. It was legislation from two different perspectives that brought about the current, relative equality in credit opportunity.

It wasn’t too long ago, comparatively, that women were not able to participate in the work force in the way that they do now. While women, those of the lower socioeconomic classes in particular, have always worked, until the 1960s, they did not have access to the same job and career opportunities as men, nor the same rates of pay. This has an obvious role in credit matters, as income and credit opportunities are obviously linked. Legislation is 1963 guaranteed equal pay to women for equal work, though achieving that goal completely is still a struggle. In 1967 came affirmative action benefits for women and in 1968 it became illegal to place help wanted advertisements that specified the gender of the employee sought.

While these changes improved the income situation, it still did not bring equal access to credit opportunities to women. Still, they found themselves – and their credit worthiness – judged in terms of their husband. They had access to credit in their husband’s name or as an appendage of their husband, but not in their own individual right, in their own name. Naturally, as divorce became more common, this became a very significant problem for women who were forced by circumstances to start a new life as unmarried women.

In 1974, legislation came into being that addressed this, the Equal Credit Opportunity Act. With this legislation, it became illegal to discriminate in terms of credit opportunities based on such things as gender, marital status, race, religion, age, nation of birth or prior residence, and even the receiving of assistance from social services or public assistance. However, as with civil rights legislation for African Americans and other non-Caucasian groups, it took time for legislation to translate into common practice. The Equal Credit Opportunity Act went into effect on October 28, 1975. 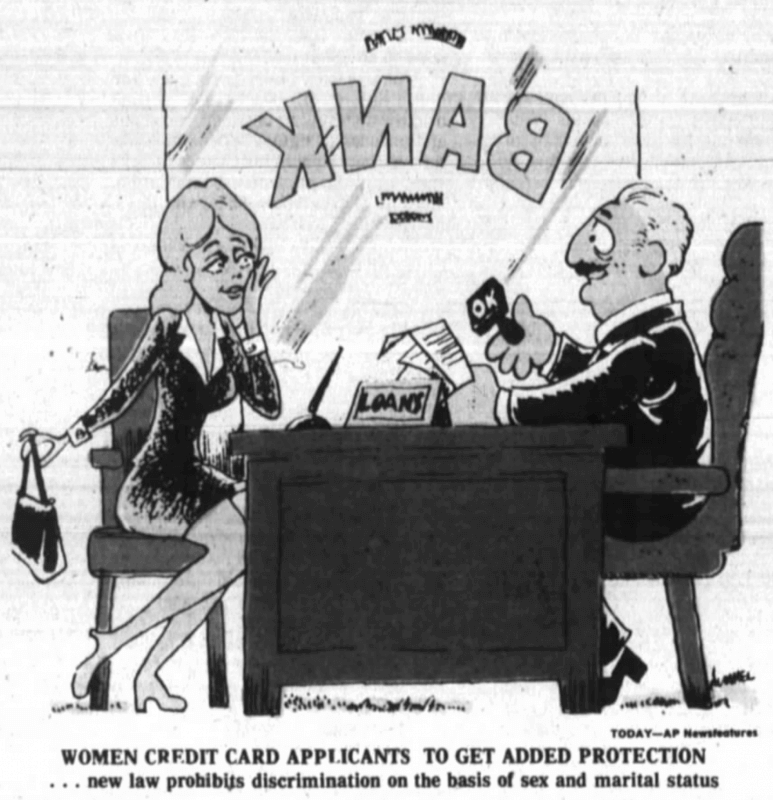 Cartoon depicting a woman applying for a credit card at a bank following the passage of the Equal Credit Opportunity Act of 1974 (effective October 28, 1975), which prohibited discrimination for credit on the basis of sex and marital status.

For women to enjoy the access of credit that they have today, those two factors had to come together, access to the same high paying employment that and recognition of their full, adult personhood outside of, and even within, the marital relationship. However, legislation can only go so far in resolving such matters, and it took the widespread social acceptance of such concepts to create the opportunities enjoyed by women today, when they can borrow to start a business, obtain their own mortgage for their own home and have credit cards in their name.

Liz, Financial Advisor
Liz is a financial advisor and co-founder of Direct Lending Solutions.She specialized in business and finance during her studies at Georgia State University. Liz is passionate about matters of consumer credit and continues to contribute by sharing her financial expertise with others.
Latest posts by Liz, Financial Advisor (see all)

Liz is a financial advisor and co-founder of Direct Lending Solutions. She specialized in business and finance during her studies at Georgia State University. Liz is passionate about matters of consumer credit and continues to contribute by sharing her financial expertise with others.